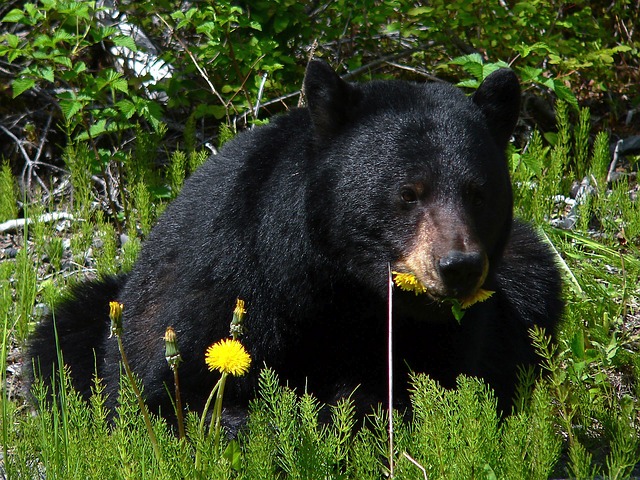 Bears munch on a great range of foods, which can vary throughout the course of the year. In this article, we'll take a look at the the eating behaviors and most common variety of foods that bears eat. We will specifically focus on black bears, grizzly bears, and polar bears of North America.

What Do Black Bears Eat?

The American black bear (Ursus americanus) is the smallest and most commonly encountered bear in North America. It lives primarily in the northern United States and Canada. Even though they are commonly known as black bears, their actual coloring can be different shades of brown, blue-gray, or even white. Further, black bears are excellent tree climbers, which is why the forest is a very common habitat for them; however, you can also find them living in swamps or on mountains.

Because of the range of environments in which they live, the black bear diet can be quite diverse. They really enjoy eating berries and larvae when those options are available. Of course, they need to eat a lot of berries and grubs to feel satiated.

Black bears will also pursue larger prey and are capable of killing animals like:

While black bears prefer younger prey (because they are easier to kill), they will go after adult deer, as well.

What Do Grizzly Bears Eat?

Aside from these items, it is common for a grizzly bear to get its daily nourishment from:

Because of their scavenging behavior, you can also find them find dining on rotting animal carcasses and even garbage.

Beyond the aforementioned food sources, grizzly bears will also dine on domestic livestock, which can really impact livestock farmers. Sheep and cows are particular favorites of the grizzly bear.

Grizzlies have been known to attack people, but only if they're provoked or threatened. The best way to prevent a confrontation with a grizzly bear is to avoid them as much as possible. If you do come across one, make sure that you keep your hands visible and don't approach the bear.

What Do Polar Bears Eat?

Seals are the he primary food source for a polar bear diet, though they will eat larger mammals when available, such as:

Though it comprises a small amount of their overall diet, polar bears will also eat some vegetation, like:

Bears actually play an important role in the animal food chain, but they don't get enough credit for their contributions. Because they eat a wide variety of animals and plants, a healthy bear population is usually an indicator of a healthy ecosystem.